The FIRST Robotics Competition Team 6004 f(x) Robotics was established in August 2015 at Smithfield-Selma Senior High School (SSS) by mathematics teachers Richard Phillips and Sharon Dufour. As the second FIRST team in Johnston County, N.C., the team’s creation sparked an era of growth in Science, Technology, Engineering, and Mathematics (STEM) in the area.  f(x) Robotics began to serve the STEM interests of the students at SSS, but would later grow to become a community team open to any student interested. The name f(x) Robotics was created by the members during the team’s rookie year to signify their love of STEM as f(x) mathematically represents a function. The team’s name also inspired the phrase, “We function under stress, which equates to our success!” 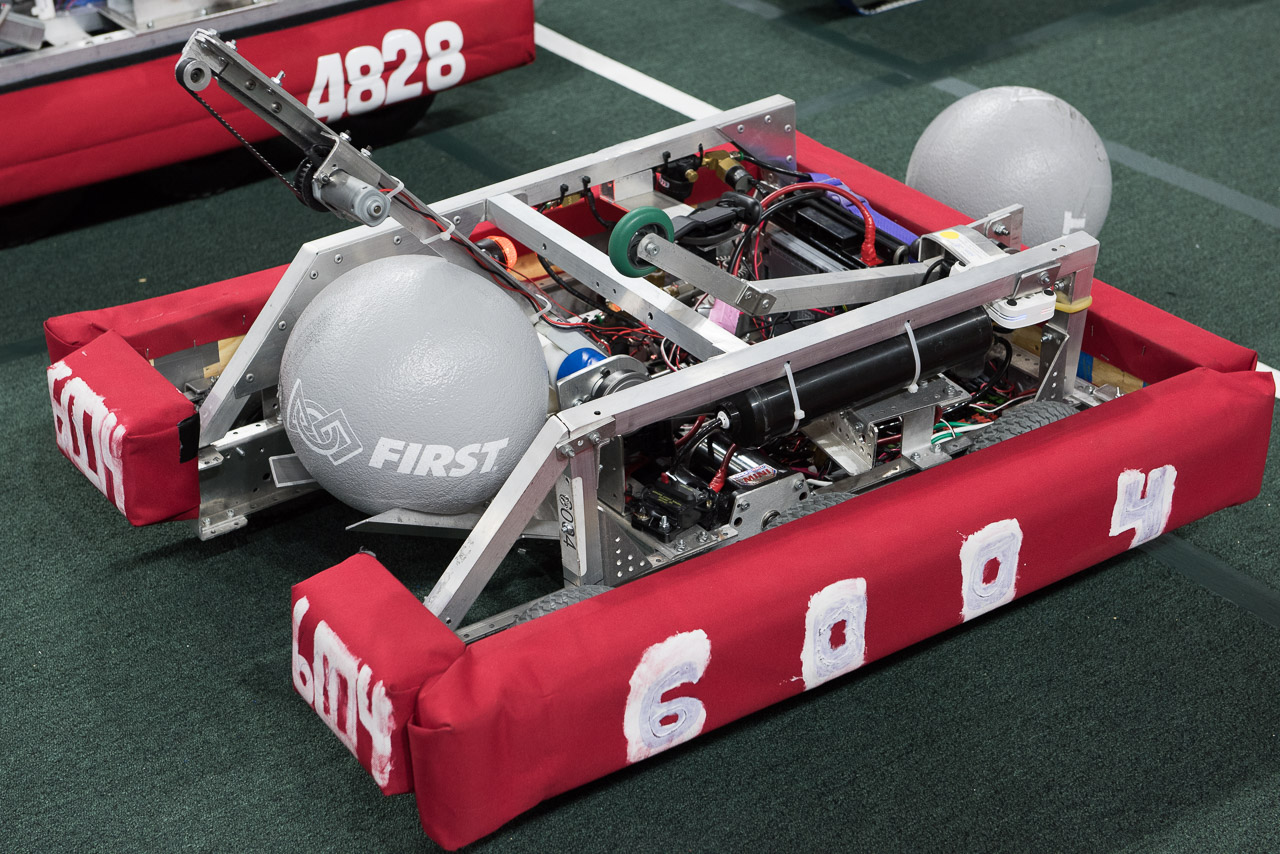 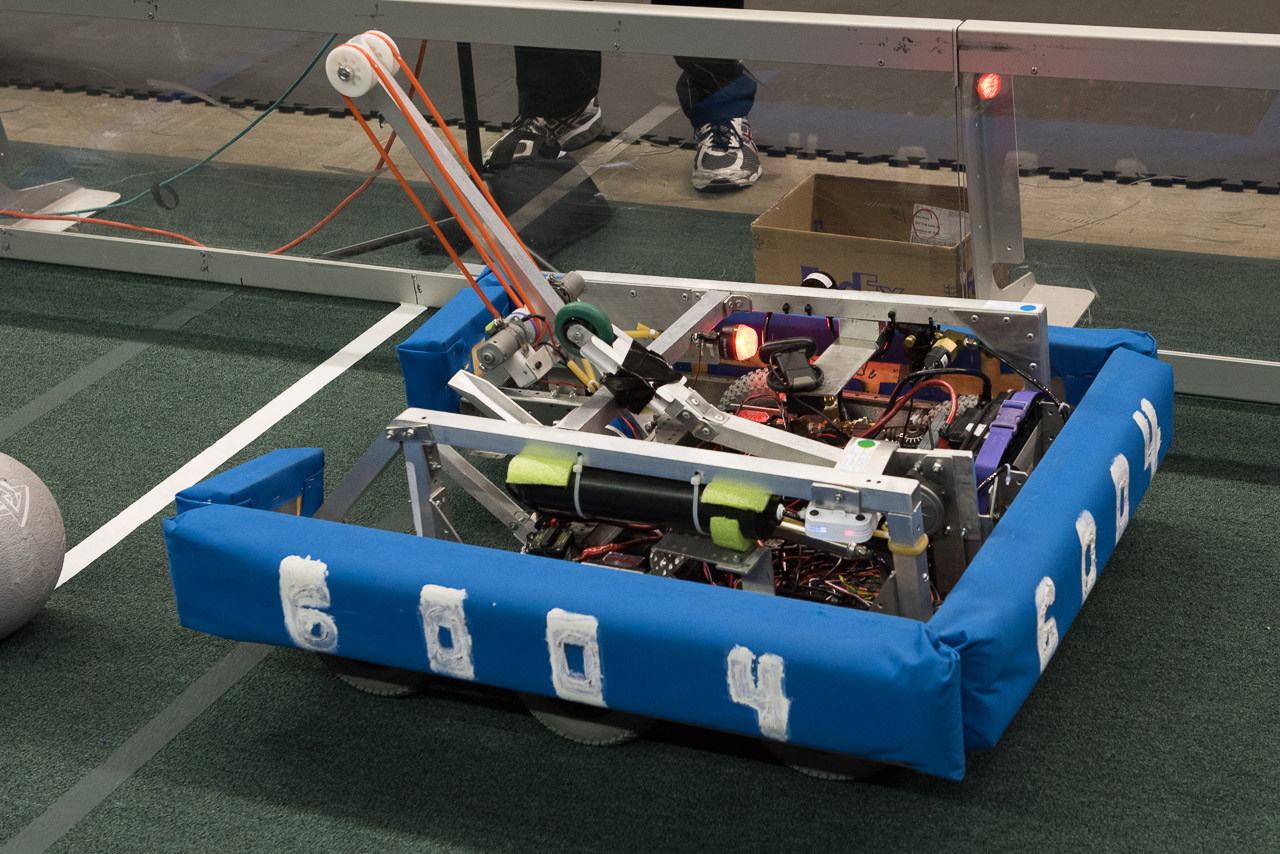 Due to strong ties to SSS, the team branded itself in the school’s blue and gold colors. The team adopted the phoenix as its mascot to symbolize a rise from the ashes. In January of 2016, f(x) Robotics began building their beloved competition robot Fawkes, named after Dumbledore’s phoenix in Harry Potter, to compete in the 2016 FIRST Robotics Competition Stronghold. The team quickly took to the medieval theme of the Stronghold Competition, seen easily by their pit at competition. Led by the team’s elected captain Noah K., a high school senior, the team of less than ten students joined by a few mentors sought to build a robot that could compete on the Stronghold field.

Stronghold featured several physical obstacles in center field, referred to as defenses. Additionally, the field showcased castle towers that could be used to score boulders throughout the match, and could be climbed by teams in the last 30 seconds of the match. As a rookie team, f(x) members decided to construct a durable design that featured a rotating arm on its back to cross defenses. The primary mechanism on the front allowed for the robot to collect and score boulders at the base of the castle before parking there at the end of the match. The team primarily earned points by crossing defenses, and playing some defense of their own to hinder the opposing alliance.

While the team accomplished a lot as they competed, just before such matches the rookie team sparked a long held tradition that Team 6004 continues to uphold: loathing bumpers. The team arrived in Guilford County with thin, black numbers on their bumpers instead of the required 1 inch thick white letters. Quickly painting the bumpers in the hotel that Friday night before qualification matches the next day became just as memorable as the matches themselves. At Guilford High School, the team advanced through qualification to the semifinals in their debut robotics competition alongside Team 3971 Kai Orbus and Team 5679 Girls on Fire. Team 6004 was awarded the Highest Rookie Seed and Rookie Inspiration Awards at the end of the three day competition, returning to SSS with a great sense of accomplishment after the team’s first ever competition.

Because 2016 marked the first year that FIRST North Carolina switched to the district model for competition, the team was additionally guaranteed to compete at Campbell University for their second district competition. The team was again awarded the Highest Rookie Seed Award for their ranking placement at the end of qualification matches. While the team was not selected for finals at that competition, their total ranking points between both district competitions earned them a place in the State Championship. Hosted in Charlotte, the State Championship played host to 33 out of the 52 present in North Carolina at the time. While the team did not receive any awards at States, the opportunity for a team coming from an area lacking experience in robotics in their first year was incredible. 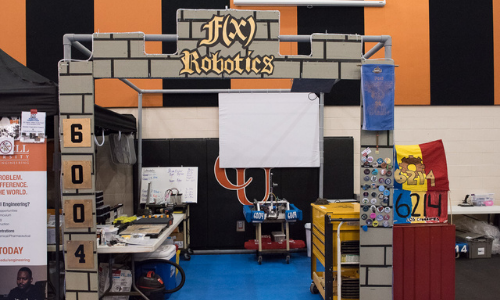 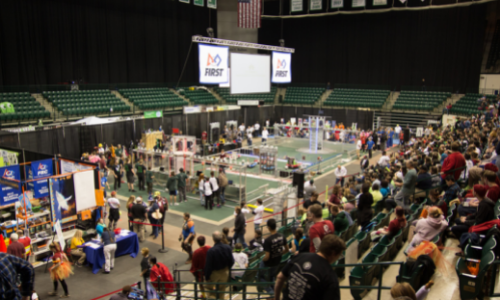 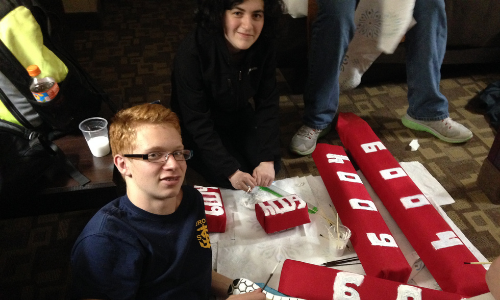 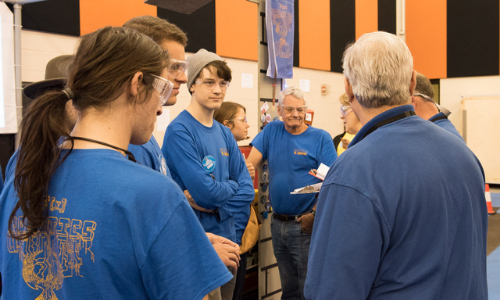 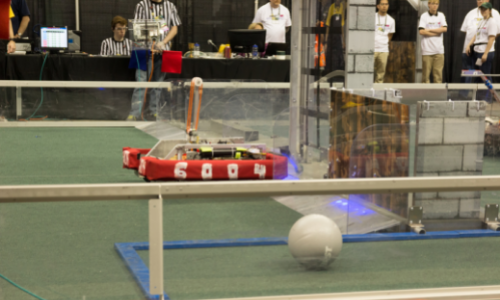 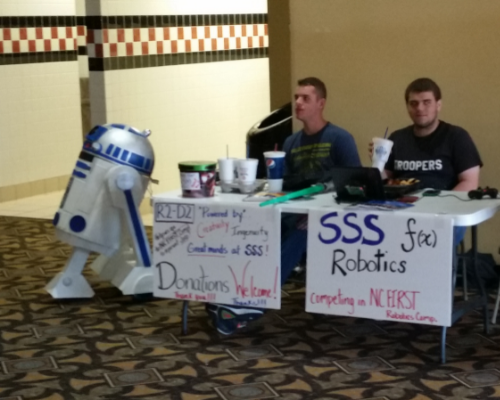 Noah and Josh with R2-D2 at the Smithfield Cinemas

The team first engaged with the community at Smithfield Cinemas during the premiere of Star Wars: The Force Awakens alongside the team’s first project, a functioning replica of R2-D2. The droid made its debut in December at the movie theater to greet the incoming waves of fans excited to watch the newest Star Wars movie. Using windshield wiper motors and a hidden speaker, the team’s R2-D2 was able to move and sound like its movie counterpart. The team used the opportunity to raise money for their upcoming competition season, and to teach the community about the importance, and fun, of STEM. 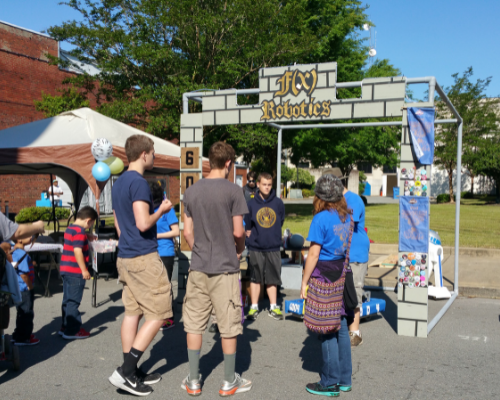 Team 6004 f(x) Robotics completed their rookie year with the satisfaction of having achieved three awards, a trip to the State Championship, a strong competition robot, and a lasting replica of R2-D2. Even today, R2-D2 remains the longest standing robot in Team 6004’s history. Following in the early team’s footsteps, Team 6004 would continue to bring R2-D2 to the Smithfield Cinemas for future Star Wars movies and show off the latest competition robot at the Ham and Yam Festival.

While the team ended their rookie season strong, the team was given a final challenge as they prepared for their second year. Because a majority of the team members were seniors, the already small team saw a dramatic decrease in membership after graduation in June. The remaining few members were therefore tasked with recruiting several new members to once again “rise from the ashes.” In the offseason, the first round of team growth was seen just before the THOR (Thundering Herd of Robots) offseason competition. This event in September 2016 served as the final time that teams like f(x) in North Carolina would compete against one another on the Stronghold field.